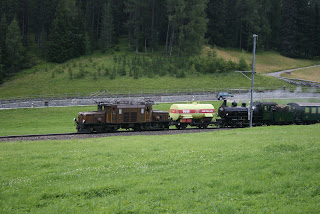 In the late afternoon Ge 6/6 I 415 returns from Davos to Landquart with in tow a special tanker wagon with fire fighting equipment and G 4/5 107 steamloco with a special heritage train.
The strange composition is seen rolling down the 45 per mil (4,5%) grade between Wolfgang and Davos Laret.
In fact Ge 6/6 I 415 and the tanker wagon are the fire brigade train that followed the steam train to Davos, as a security measure.
By dry weather or when there is a risk that sparks or ashes from the steamloco could cause a forest or verge fire, a second train with fire fighting equipment follows a few minutes after the steam train 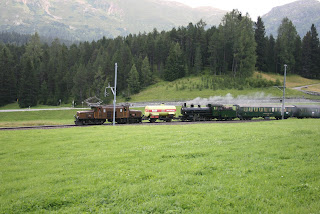 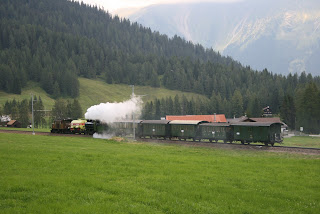 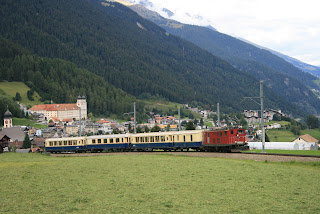 On a late afternoon, HGe 4/4 I 32 of the MGB has just left Disentis with a Pullman Express to Andermatt. In the background we see Disentis abbey, a Benedictine monastery founded ca. 615. Disentis, 10-09-2010. 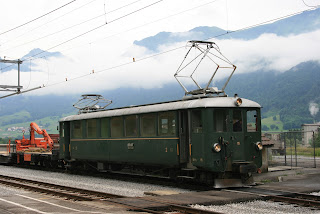 Be 4/4 115 of the TPF (Transports Publics Fribourgeois) with a light work train, Grandvillard (on the Bulle-Monbovon line), 15-06-2009. This veteran entered service as BCe 4/4 415 with the CEG (Chemins de fer Electriques de la Gruyère) in 1906. After the merger of the CEG into the new GFM (Gruyère-Fribourg-Morat railway) in 1942 it was renumbered and reclassified ABe 4/4 115. In 1977 its classification became Be 4/4. In 2000, after the merger with the TF (Transports en commun de Fribourg) the GFM was renamed TPF and Be 4/4 115 continued as a service and reserve unit for a third, successive company. 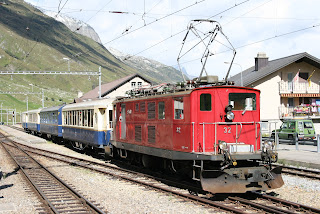 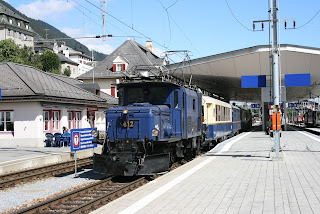 Ge 6/6 I 412, the blue crocodile of the Rhätische Bahn, arrives at Disentis station with the Alpine Classic Pullman Express. Here the RhB engine will be uncoupled and replaced by MGB veteran HGe 4/4 I 32, who will take the train to Brig and Zermatt.
Disentis, 07-09-2007. 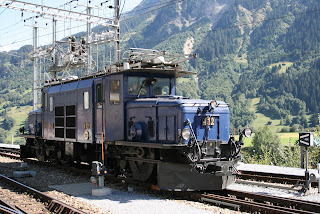 Ge 6/6 I 412 shifts on the siding and to the shed, where it will wait for the return of the Pullman Express from Zermatt, two days later.
The engine was painted in blue in 2005 (sponsored by BEMO, miniature train models), to match with the Pullman cars. After an irreparable transformator damage the engine was scrapped in 2011.
Disentis, 07-09-2007. 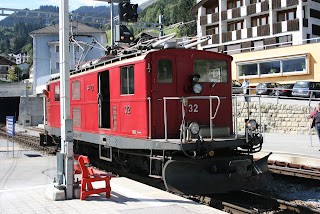 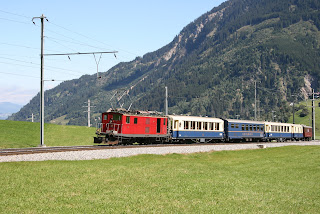 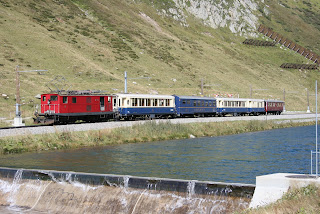 The Pullman Express has left the short adhesion track section along the Oberalpsee and enters now the railrack section to Nätschen and Andermatt. ﻿The last car is AB 2121, a restored and rebuilt car of the BVZ (Brig-Visp-Zermatt railway) that entered service in 1906. The car was added to the train in Disentis.
Oberalppass, 07-09-2007. 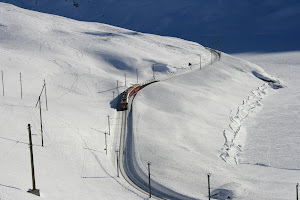